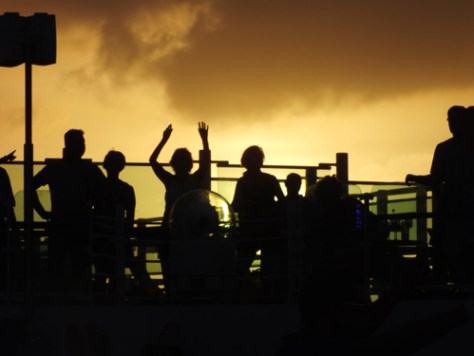 Our third day on Britannia was a sea day which is always a perfect opportunity to relax, explore the ship and get our bearings.

We started the day with a breakfast of steak and strawberry smoothies in the Epicurean before heading to the Ivory Suite for a Facebook group get together where everyone brought a small gift which will be delivered to kids in Jamaica and Dominica later in the cruise. It’s a lovely idea and an important reminder of how lucky we all are.

The weather at sea was glorious so we went up to top deck where after reading much about sun bed hoggers my faith in human nature was quickly restored by a fellow passenger who’d spotted us searching for beds and kindly offered us two right beside the pool! A few beers and swims later it was time to escape the midday sun so we changed and went to The Peninsular Restaurant for the al a carte lunch and enjoyed yet another amazing curry. 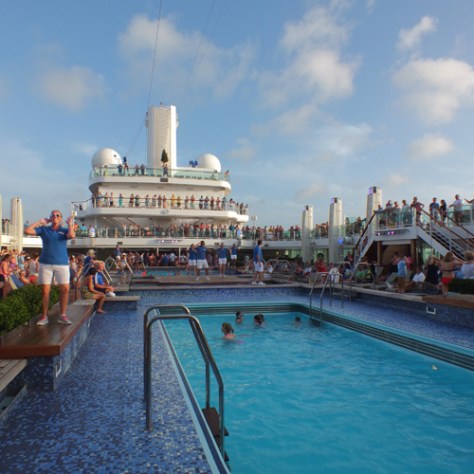 Although we are on freedom dining where we can pretty much eat when it suits us, on Christmas Day & New Years Eve everyone is allocated set dining times, an early sitting at 6.15 or a later one at 8.45. P&O had emailed ahead to ask our preference and travelling with a small child early dining always works best for us but unfortunately we’d been allocated the late sitting. I spoke to the restaurant manager who wasn’t able to make any promises however after a quick chat with Andrew our wonderful butler the matter was swiftly resolved in our favour. Given that our son is so excited about the big day and will have us up at stupid o’clock I’m just hoping we’ll all stay awake long enough to enjoy our turkey!

After lunch Finn decided it was time to try Britannia’s kids club which is called The Reef and is situated on deck 17 mid ship. He’s in Surfers which is for 5-8 year olds and there’s also Splashers for 2-5’s, Scubas for 9-12 year olds and H2O for the teens who get their own pool at the aft of the ship during school holiday cruises and seem to be having a lot of fun on board! The Surfers room is huge with about ten PS4 games consoles, a soft play area, a movie zone, books and toys. The staff genuinely seem to love their jobs and Finn happily skipped in without so much as a backwards glance. I collected him a couple of hours later from the Live Lounge where they were having a welcome aboard party. Finn and 30 other Surfers were dancing away to a DJ and he was delighted he’d already won two turtle teddies in the games they’d been playing. At this rate we may need another case! 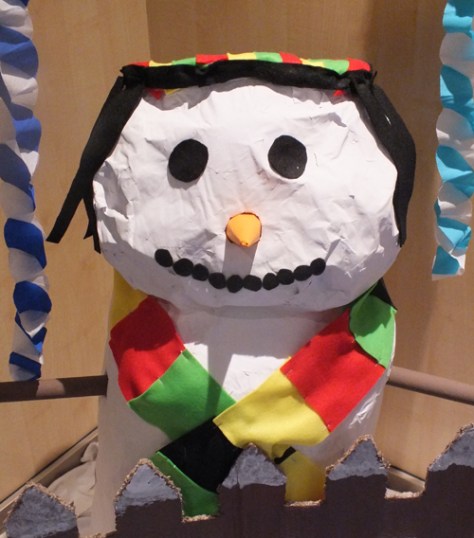 It was the first of four black tie gala dinners tonight but we decided to skip the main dining room and eat instead in the Glass House, Olly Smiths wine and tapas bar which is priced al a carte at £5 for 3 small plates and £7.50 for a steak with those legendary triple cooked chips and a sauce of your choice. While we waited for a table we had a glass of wine at the bar and got chatting to some of our fellow passengers. Britannia really is the friendliest ship I’ve ever been on, possibly because it’s all British passengers but without fail everyone we’ve spoken to has been absolutely lovely.

We were seated at a table in the annexe of the bar, possibly not the best in the house but as Finn was absolutely exhausted he was grateful for the sofa area and promptly fell asleep before our starters even arrived. Andy and I enjoyed three small plates of prawns, chicken tenders and a chorizo and bean cassoulet followed by steak, chips and pepper sauce washed down with a highly recommended Marques De Riscal Rioja. It’s one of the options on the Commodore’s wine package we bought earlier in the cruise that gives us a dozen beautiful bottles for £230 saving around 10 to 15% on the standard wine list prices. Regular readers will know I like a glass of red so we think this is good value for any wine lovers and we are on holiday after all!

We’d hoped to watch a Beatles tribute act in the Live Lounge but as Finn was fast asleep we carried him back to bed after the meal and all had an early night.

Day 4 was Aruba, a port we’d not visited before and I’d pre-booked a P&O excursion to De Palm Island, an all inclusive beach resort a 5 minute ferry ride from the main land. We were hoping to give Finn his first taste of snorkelling however during breakfast Aruba disappeared into thick dark clouds and the heavens opened with a tropical rainstorm! As often happens in the Caribbean, it quickly blew over and it was blue skies again by the time we boarded the coaches for the 15 minute journey to the ferry port but the sea remained choppy for the short boat ride and was probably not best suited to a first time snorkel.

Aruba wasn’t as pretty as I’d expected as we passed through rows and rows of shops selling gem stones and along roads bordered with acres of scrubland but thankfully De Palm Island’s beaches were facing in the other direction! As a point of interest, the offshore oil rig looking things you may see from the ship and the island are actually desalination plants that pump fresh water back to Aruba. 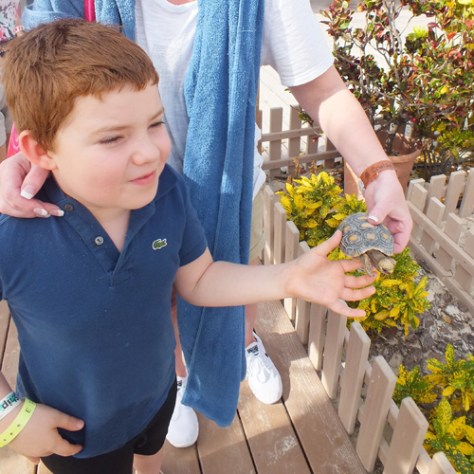 De Palm has a water park, a zip line, air jumper trampolines, banana boat, snorkelling, beaches and all you can eat and drink included in the ticket price. You can also upgrade to do snuba diving or a sea trek. We paid £51 each for us adults and £34 for Finn which I thought was pretty good value. The food wasn’t the finest quality we’ve eaten and the drinks were a little weak but we had a great time paddling in the turquoise water, petting turtles and drinking wine that was almost as rough as the sea!

Back on the ship we were a little later than usual for dinner so there was a small queue but we said we were happy to share a table and were soon seated with another couple and had an enjoyable dinner sharing hints and tips on ports of call. Finn chose to dine off the adults menu joining Daddy on a starter of duck and a main of lamb with dauphinoise potatoes whereas I had a delicious piri piri chicken. After dinner I took Finn to kids club for movie time and Andy & I had a quick nightcap in the Live Lounge.