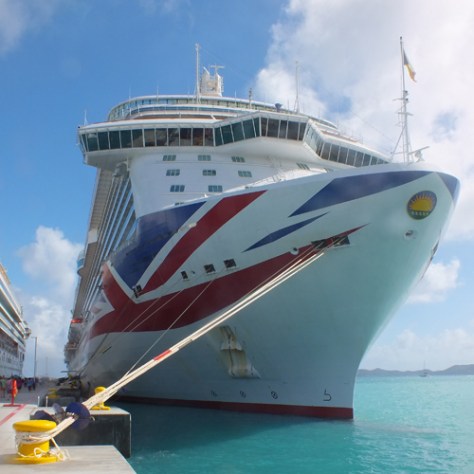 Six years on from our first ever cruise on Ocean Village (the cruise for people who don’t do cruises) we returned to Barbados to board P&O’s flagship Britannia for Christmas and New Year. It will be our first Xmas at sea and as we’re travelling with a very excited 8 year old I won’t be blogging daily but will share our thoughts on the ship and cruise every few days or so. As usual, we’ll add photos on our return home.

We were on the first of three Manchester flights to the ship on Friday so we stayed at the Radisson SAS hotel at the airport the night before. It’s a short walk to the terminal and one of the nicest things about travelling with P&O is that once you’ve checked in your luggage you don’t see it again until it’s in your cabin. The flight was on a Thomas Cook Airbus 330 and although we’d not been able to get the upgrade to premium economy, the standard seats had ample legroom for people our size. We had a delicious James Martin Thai chicken curry for lunch and watched the film version of Jersey Boys which was even better than the stage show we’d seen earlier in the year. The movie / TV choices were fine for us but you could buy a premium package for £4 giving a much wider choice which we did for Finn so he could watch Minions and other kids stuff to help while away the flight.

8 hours later we landed in Barbados where coaches awaited us for a 30 minute transfer to the port. As everyone was going to the ship we didn’t have to go into the airport at all which makes life so much easier after a long flight. We were on one of the first coaches to arrive at the cruise terminal and after collecting our cruise cards and passing through security we were on board within 10 minutes. 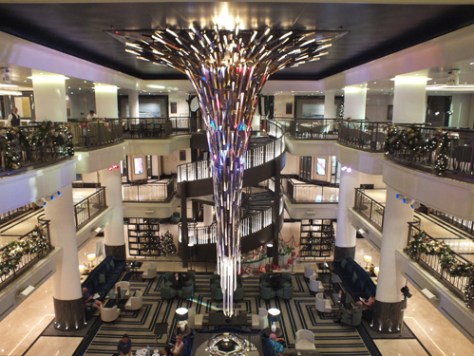 Britannia is every bit as spectacular as I’d hoped it would be and its understated elegance reminds me of Malmaison – a boutique hotel at sea. I was a little concerned as I’d read a few less than favourable reviews but P&O are clearly repositioning their brand and appealing to a different market. It may not be to the taste of seasoned passengers but personally I love it! 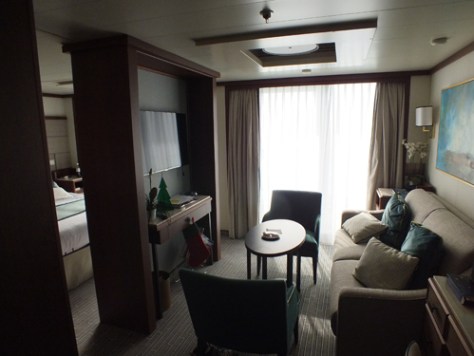 Our cabins were ready on arrival so we went to deck 14 to find our suite and it is stunning. We’ve never had a suite before but as it was Christmas we decided to treat ourselves and I’m so glad we did. It’s the size of two regular balcony cabins and has a living room area with a sofa bed for Finn, a bedroom and a palatial bathroom with a whirlpool bath and gorgeous White Company products. There’s also a double size balcony which was wider than I’d expected having read a few disparaging reviews, two flat screen TVs, a posh coffee machine as well as a complimentary bottle of Verve Clicquot and chocolates which was a nice touch. Our butler Andrew and cabin steward Renalyn popped by to introduce themselves and check we had all we needed, reassuringly great service by both.

It was time for a quick explore and the obligatory trip to the buffet! We enjoyed a fabulous chicken curry, a stroll across top deck then a bottle of red in Ollly Smith’s Glasshouse, a gorgeous bar in the atrium overlooking the spectacular shard style chandelier. The menu looks fabulous here and we’ll definitely be back to sample the steaks and triple cooked chips very soon. 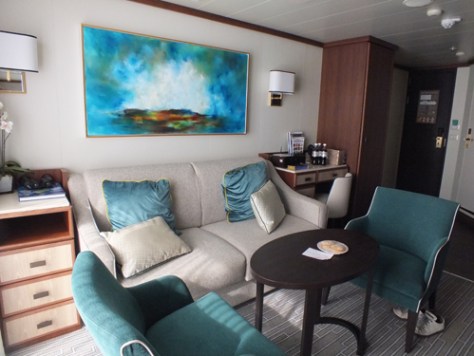 We returned to our cabin and our cases had arrived. I really love the amount of storage we’ve got, 4 wardrobes and more coat hangers than we could ever need! We had a quick dip in the whirlpool bath (heaven) and got changed for dinner. We’re on freedom dining which allows us to eat whenever we want and we went to the Peninsular restaurant where we had starters of pate and tomato soup followed by fillet steak and bernaise sauce. There was great service by a particularly attentive waiter who spotted that Finn had wolfed his croutons from his soup and so brought him some more. A lovely touch! 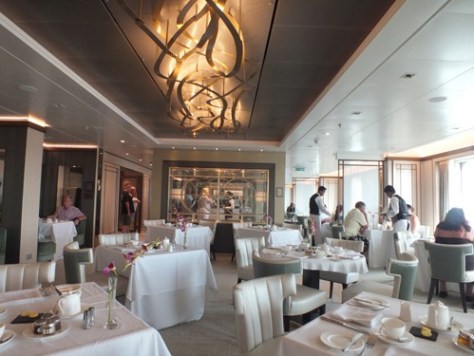 Day two began with breakfast in The Epicurean, one of the speciality restaurants on board where we enjoyed possibly the best breakfast ever at sea, a full English with back bacon and minute steak.

Britannia is so big it boards over two days which means you get an overnight in Barbados if you are day 1 passengers or an overnight on Day 13 if you arrive on day 2. On reflection I’m glad I booked the Friday departure as it’s nice not having to muster on arrival and we get to enjoy Barbados early in our trip. We’ve been here before so know it’s just a 15 minute stroll into town although there were plenty of taxis for those who don’t want to walk or who might fancy a tour of the island. We stopped at a bar overlooking the marina for a reasonably priced Banks beer at just two US dollars. 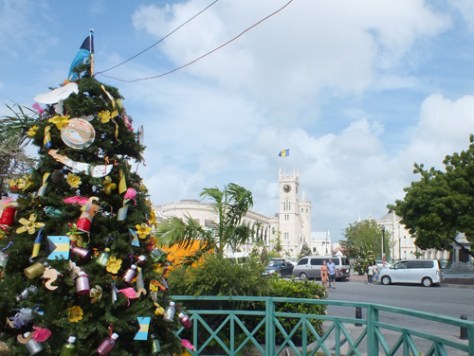 We walked over the bridge by the stone arch and admired what seemed like hundreds of real Christmas trees that had been decorated by local schools. We passed a derelict cinema that looked like something out of a Baz Lurhman film as we headed to The Boatyard, a beach bar and our destination for the day. For $15 cover charge you get one free drink, sun loungers, umbrellas, free wifi and a lift back to the ship. It’s a gorgeous beach playing great holiday tunes and we found a daybed and spent a lovely few hours drinking ice cold beer and swimming in the Caribbean sea.

We took the free ride back to the ship and stopped at the duty free shops in the terminal to pick up a bottle of rum to take back on board and enjoy in our cabin, another P&O bonus unlike many of the American cruise lines who’d confiscate it at the gangway and give it you back at the end of the cruise!

We lunched at the buffet, yet another tasty curry, then Finn and I had a swim on top deck and a reasonably priced ice lolly before chilling on the balcony in the sunshine. 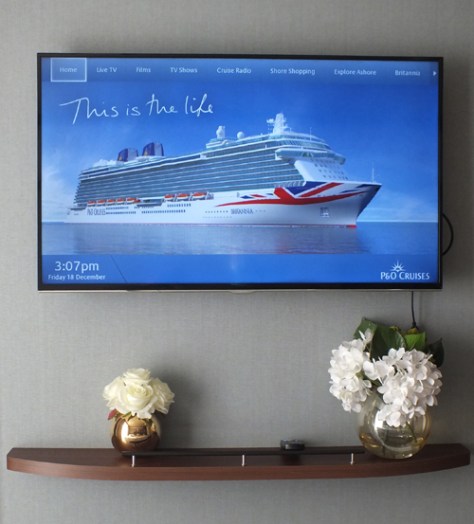 At 6pm we did the muster followed by a glass of red in the Glasshouse, my new favourite bar, and dinner in Peninsular. Then it was up to Top Deck to watch Pulse an absolutely brilliant party band featuring 4 vocalists and a backing band doing hit after hit in the warm night air as we sailed away with a rum and coke in hand. It was an incredible start to what I’m sure will be an amazing holiday. First impressions? Wow, Britannia, and to quote Rob Brydon, This is the Life…