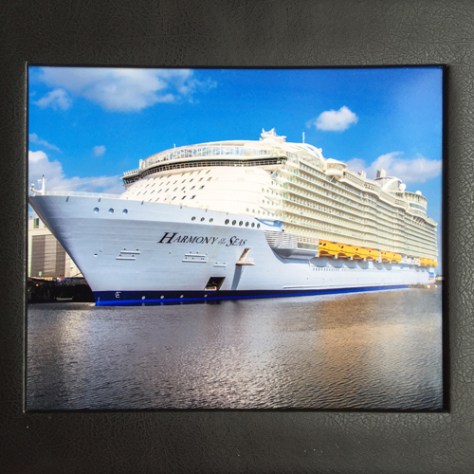 This is my final post on Harmony of the Seas maiden voyage from Southampton to Barcelona and covers our last three days and some thoughts on Royal Caribbean’s brand new flagship.

Following Vigo we had another sea day and missed breakfast due to a late last night but after lunch I finally braved the Ultimate Abyss and can now say its the must do thing on the ship. Dropping 100ft in around fourteen seconds through an enclosed tube might sound scary but it really wasn’t. You enter the ride on top deck through the jaws of a huge fish and lie with your feet inside a mat to go down one of the two slides. The inside is lit up in coloured hoops and the twists and turns feel much gentler than they look. It goes by in an instant and no sooner than I’d set off I was clambering out the other end with a smile on my face! 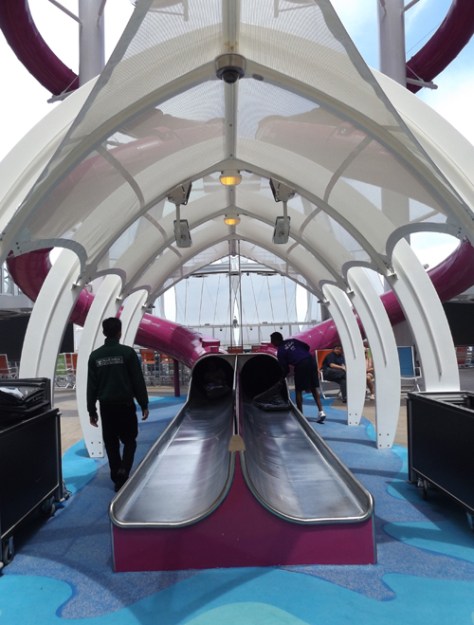 That evening we dropped Finn at Adventure Ocean for a couple of hours as we had a reservation at Wonderland, the ship’s ‘imaginative dining’ experience. It’s the same kind of food meets magic concept made famous by Heston Blumenthal but as we’re unlikely to ever eat at The Fat Duck the $49 cover charge seemed a reasonable way to sample the whimsy.  Sadly, the place seemed to be in chaos as we arrived with a disappearing hostess and countless diners just left waiting in the upstairs bar / reception area. I guessed they were short on tables in the restaurant area below and people were offered free drinks as they waited. After around a twenty minutes delay we were eventually seated.

You could sense the stress in the air and after the cute touch of painting your menu with water to make it visible I could possibly see why. The menu is completely unstructured and you get to choose dishes from any or all of six distinct ‘themes’ (sun, sea, ice, earth, fire and dreams) which would put considerable pressure on any kitchen. As a result the food arrived slowly and randomly throughout the evening as we tried out things like distilled tomato juice in test tubes and  a boiled egg in a cloud of wood smoke. We knew the food would be eccentric but  ultimately we left disappointed with the experience and the atmosphere. 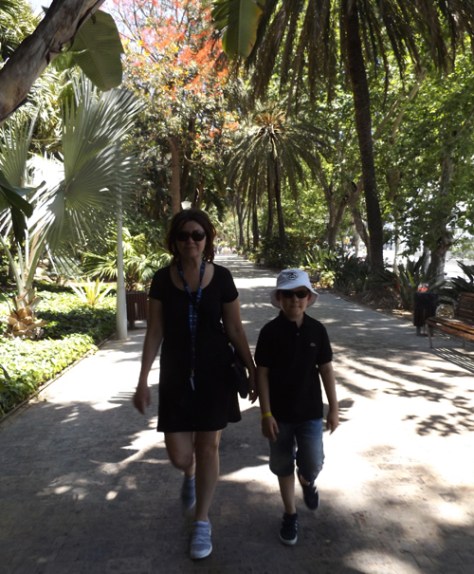 On Friday we visited one of our favourite Mediterranean ports, Malaga. You can walk from the ship to the town in around 15 minutes if you want but there’s also a five Euro shuttle bus that drops you off and picks you up from a spot just outside the port. From there you can cross a main road and head straight up to the nearby cathedral and it’s cafe squares or turn left once you’ve crossed and take your next right for the the old town’s main shopping street.

We chose to walk down the shoreline promenade to the now year old Centre Pompidou Malaga, an art gallery outpost of the one in Paris with what looks like a huge glass Rubik’s cube on its roof. From there we walked back towards the cathedral through the shade of a park that skirts the main road full of palms and ponds and flowers. In amongst the trees we stumbled across a kids play area with a strategically placed cafe where we had our first glass of red and Finn complained that the slides were too hot. 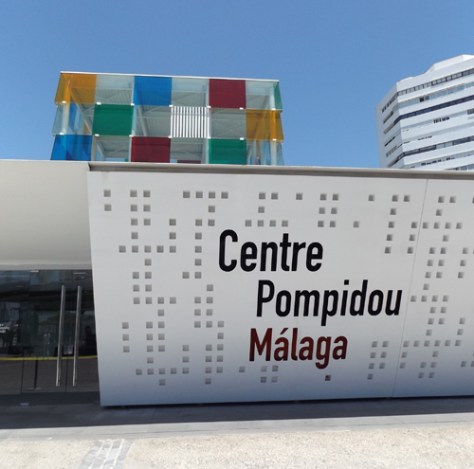 The temperature must have been well into the 80s as we looked around the shops and walked over to the cathedral where we stopped for Rioja and some amazing patatas bravas at the cafe with the red umbrellas opposite the fountain and the yellow painted mansion. It kept us going until dinner at Jamie’s Italian, a $25 a head version of the chef’s restaurant chain at sea where portions are generous and the service is superb.

Saturday was our last full day on Harmony and we were at sea for the final sail to Barcelona. It was a day to tick things off so all three of us got harnessed up for the main climbing wall and took photos that suggested we were much higher than we actually were! After lunch we took the seven minute trip on the Rising Tide Bar where someone lovely from the entertainment team supervised Finn to press the go button and took some great family pictures of the three of us with the Royal Promenade as a backdrop.

There was an announcement in the afternoon that there were spaces for a matinee performance of Grease so we went and caught it for the second time and yet again the cast were unbelievable. We’d loved Hairspray on Oasis but this is unmissable. After the show it was time to get packed and put our cases out before a final dinner in Coastal Kitchen and an early night. 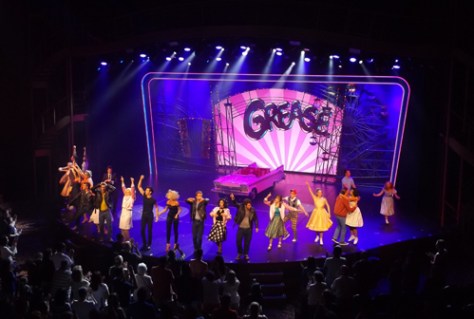 The next morning we had to leave our suite by 8am and following breakfast we used the lounge to await our 9.30am disembarkation time. There was a slight delay port side before we could get off but we quickly found our cases and were soon in a €39 fixed price taxi to the airport for our flight home to Manchester.

We’ve had an amazing week on an amazing ship so please don’t believe the scare stories spread by journalists who were never on board. Harmony is magnificent and completely finished.

Royal Caribbean have yet again raised the bar for the family market and rumour has it that a further three Oasis class ships have been commissioned. I hope you enjoy Harmony as much as we did and if you have kids of any age this ship really does have something for everyone. Do  make sure you catch Grease and and if you’re feeling brave you’ll love the Ultimate Abyss!