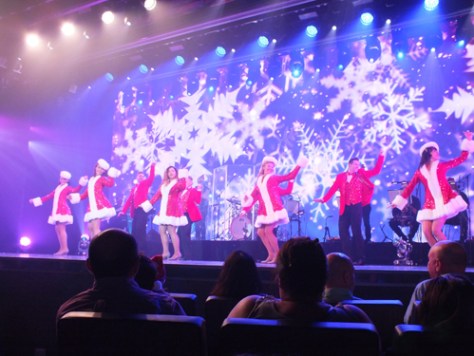 Probably the biggest question most people will have when thinking about a Christmas cruise is how does it compare with the festivities at home. I thought it would be helpful to write a post with a little more information on how P&O delivered Christmas on Britannia.

The ship is beautifully and tastefully decorated throughout with numerous Christmas trees in bars, restaurants, stairwells and even one on high overlooking the pools! We asked Andrew our butler to find out how many trees there were on board and after checking he said 23 but we also heard it was close to 70 which seemed more like it. There are also carefully colour coordinated wreaths and gingerbread villages dotted throughout the ship and each cabin has a small and tasteful door decoration courtesy P&O which magically appeared after the first night on board adding to the mounting excitement. Many passengers including ourselves also brought their own additional door decorations which makes the walk along the corridors even more festive.

As a parent it’s a bit of a logistical challenge managing Christmas away. We had a small celebration with the in-laws the Sunday before we left when Finn received a few of his presents that would be useful for our holiday such as his own camera! Santa would then hopefully find us on board but would only be delivering small items because we’d have to bring them home and we only have a 23kg each weight allowance. Finally Santa will be leaving some of the larger items on Finn’s list at home for when we return.

The bars, DJ and bands were playing Christmas tunes from the minute we boarded and swimming in the pools in the Caribbean sunshine to Wham’s Last Christmas was a little surreal but highly enjoyable. 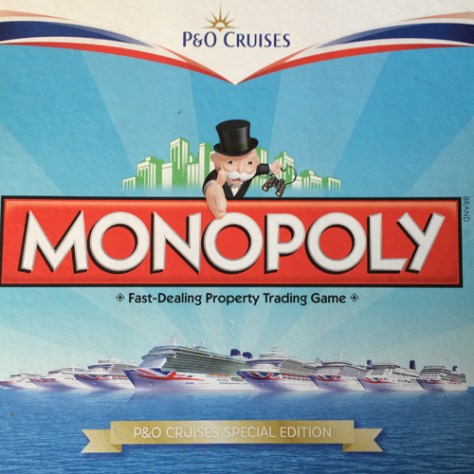 On Christmas Eve our cabin steward delivered a Christmas present from Britannia which to our delight was a fabulous limited edition P&O cruises themed Monopoly set. This is such a brilliant gift and we’ve seen lots of families playing it around the ship. We have had a game, Finn beat me but I did manage to buy my all time favourite port of call Tortola! We also received a card and a Xmas cake from our cabin attendant Renalyn and butler Andrew and we reciprocated with some small gifts we’d brought along for both of them. 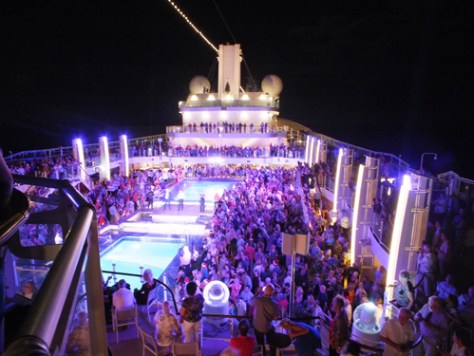 There was a note in the Horizon daily newspaper asking everyone to be up on top deck from 7pm and at around 6.30pm there was an announcement over the main PA system from the Captain saying something unusual had been spotted on the radar and that he would monitor the situation and provide us with updates to the squeals of excitement from children and adults alike! Everyone made there way up to the Lido deck where the entertainment team were in full party mode and dancing away to Christmas hits while the captain confirmed that a man in a red suit had indeed been spotted heading towards the ship. Search lights scanned the warm night air before finally focussing on one of the two blue funnels just above where we were standing and there he was, Father Christmas waving to all the crowds below. He made his way down to top deck to party with the passengers and asked all the children to visit him in his grotto on the big day. Beautifully done P&O. 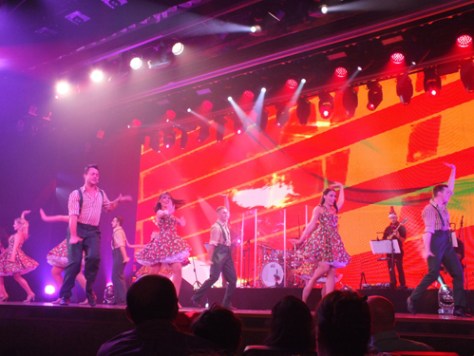 After all that excitement it was time for the performance of Jingle Bells Rock in the Headliners Theatre, a show featuring song and dance routines to all the big Christmas Hits from Santa Baby to The Pogues wonderful ‘Fairytale of New York’. Hats off to the cast who had put so much effort into a routine they can only do on one night of the year. 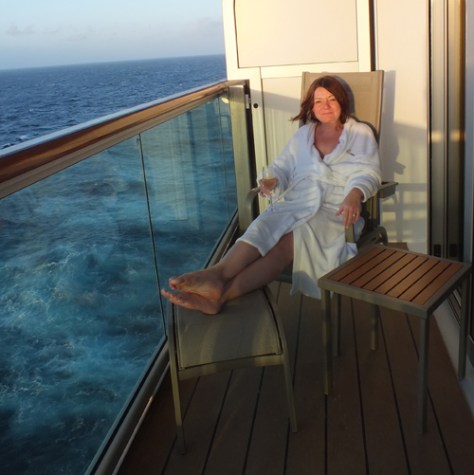 Thankfully the man with the white beard found our cabin and Finn was delighted with lots of small things to open on Christmas Day. We toasted It with a glass or two of champagne on a sun filled balcony before a steak breakfast in the Epicurean Restaurant – not a bad start to the day!

After breakfast it was time for the nativity which many of the children onboard had been busy rehearsing in kids club for a performance on the main stage in the Headliners Theatre. Finn refused to take part as at 8 I think he’s getting a little too self conscious and didn’t want to be a donkey! He was however happy to watch and it was very cute with several heartwarming and amusing moments and there wasn’t a dry eye in the house. At 12 noon the captain did his daily announcement and wished every one a very merry Christmas replacing the noontime bells with sleigh bells – a lovely festive touch.

The main Christmas meal is an evening dinner rather than the lunch we would usually have at home so we treated ourselves to a Glass House lunch and a flight of red wine while listening to a choir of passengers sing festive carols and songs in the atrium. 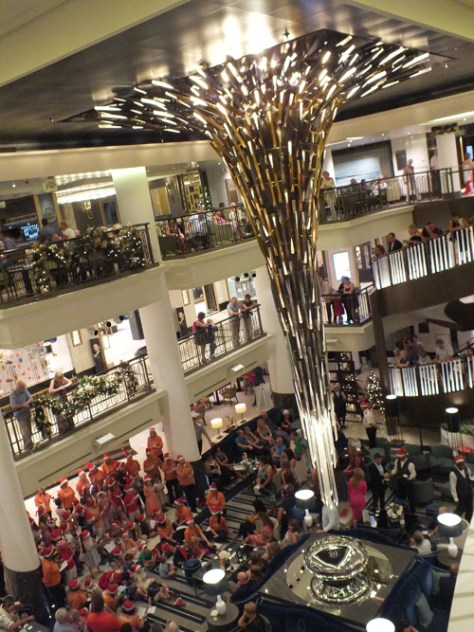 After lunch we visited top deck which the kids club staff aka the Reef Rangers had transformed with a grotto and a Christmas fair featuring lots of traditional stalls like Hoopla and Hook a Duck. We joined a short queue to meet the big man himself and Finn received a great quality remote control toy car. There was an age appropriate gift for every child and no expense had been spared. We also won an armful of prizes at the stalls and the reef rangers seemed to be genuinely having a great time and were very generous and forgiving of rules when it came to winning!

On Christmas Day the buffet and Beach House are closed and all passengers have set dining, even if you are on freedom dining. We were allocated a late sitting but managed to change this on board to an early sitting at 6.15pm. Christmas Day is a formal dress code so we donned our tuxedos and a cocktail dress and went to the Peninsular restaurant where we joined a table of ten. The table was dressed with festive chocolates and quality crackers and there were Christmas hats for all the passengers and all dining room staff wore Santa hats. There was a special festive five course menu from which we opted for the traditional turkey main course with all the trimmings although there were several other options available too. We had a thoroughly enjoyable evening chatting to our fellow guests and will be joining the same table again on New Years Eve.

In summary, I think P&O delivered a wonderful Christmas on board and we’ve absolutely loved the festivities at sea. It’s been a magical and memorable one for us and Caribbean sunshine certainly beats the torrential rain and flooding many have experienced back home.